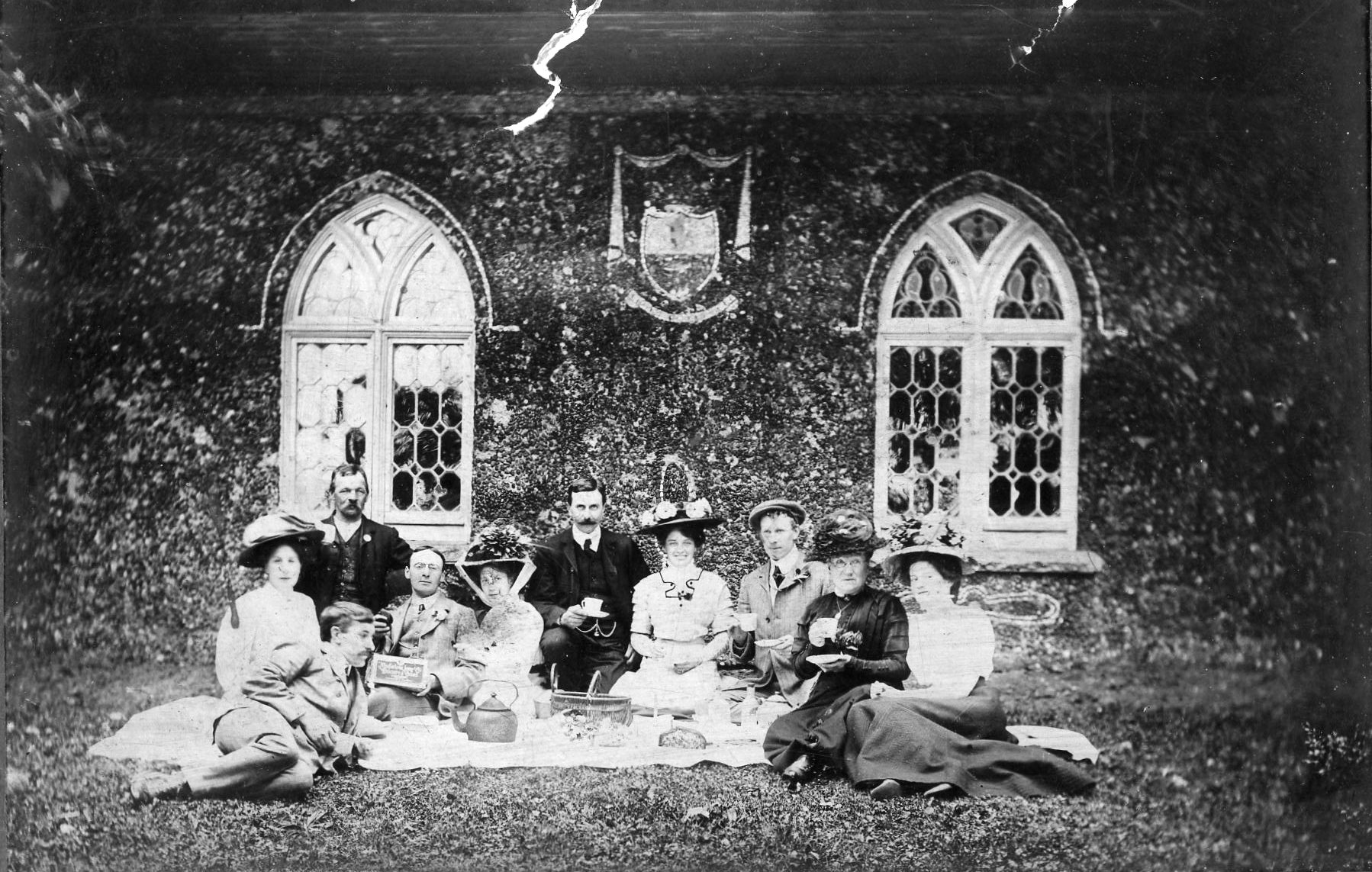 Visitors enjoying a picnic on the lawn at the waters edge nineteenth century. 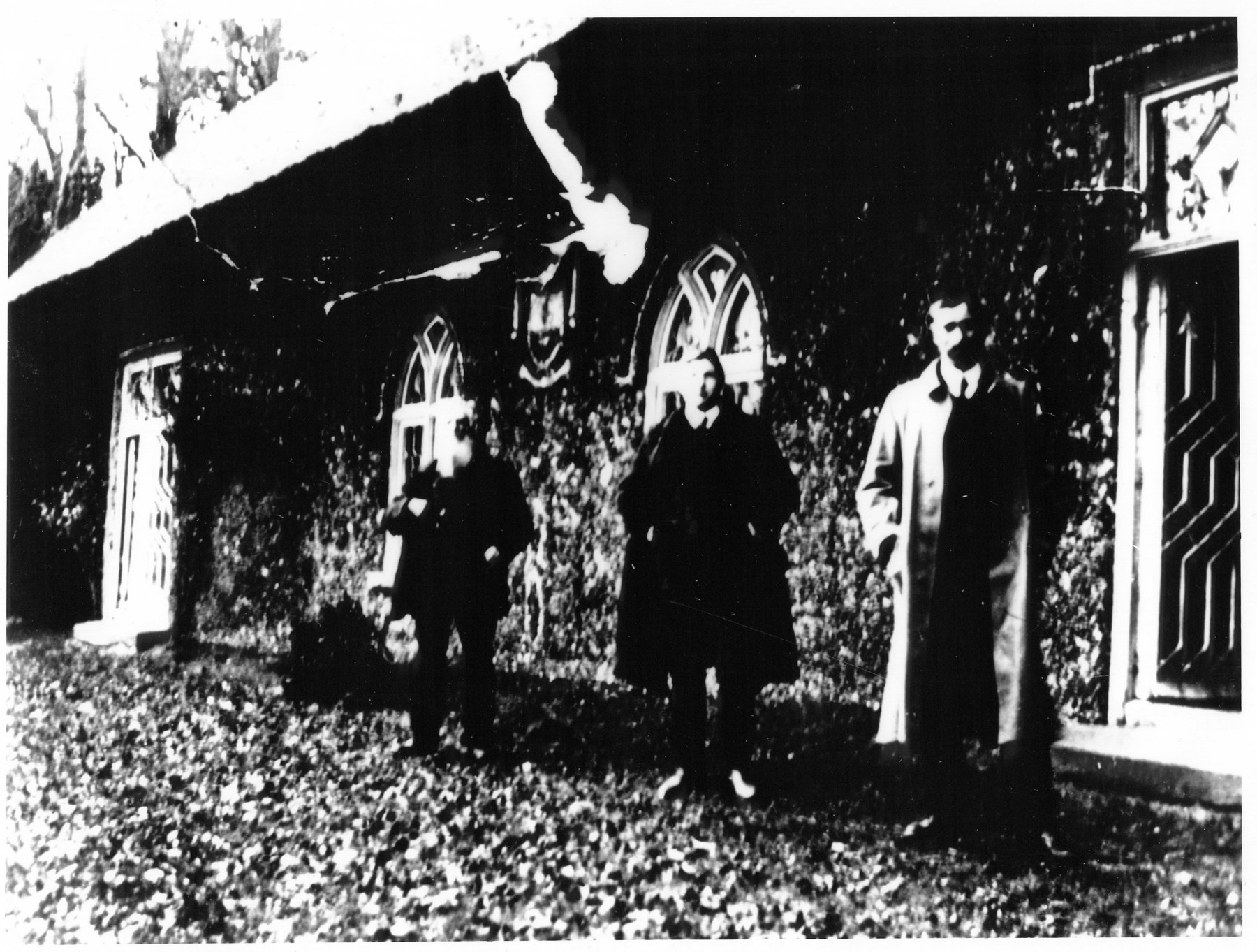 Robert Cardwell with members of the O;Neill family

Rams is mentioned in the Annals of the Four Masters. Cumaighe, son of Deoraidh Ua Floinn, lord of Durlas, was drowned in Loch-Eathach (Lough Neagh), after the island of Inis-Draicrenn (Rams Island) had been taken by the Ui-Eatach, where forty-four persons were slain.
Derlas (Derlus, Durlais) - The location for a t​​erritory named Derlus is described by John O'Donavan in Ui Tuitre, co. Antrim.
As the Ua Floinn (or O'Lynn) are described as chiefs of Durlas in the 12th & 13th centuries, and McLysaght places them in southern Armagh (between Lough Neagh and the sea), perhaps the country of Derlas was on the Armagh-Down border. McLysaght cites the Ua Floinn lineage from Clanna Rury of Ulidia, tracing their descent Colla Uais.

Since the reference in the Annals for 'Inis Darcarcrenn' seems to be Ram's Island, near the eastern shore of Lough Neagh, the location of Derlas was likely in county Antrim. The Ui Tuitre of co. Derry are known to have moved west across the river Bann, into county Antrim, supplanting the lands of the Eilne branch of the Dal nAraide by the 10th century. Ua Floinn (O'Flynn, O'Lynn) were Ui Tuirtre leaders as were the later kings of Derlas.

The origins of its present name are largely surrounded by speculation. The earliest known name was Inis-Draicrenn/ Inis Darcarcrenn, and by the seventeenth century this had been anglicised to Ems/Enis Garden. The present name may have derived from the ending "raicrenn" of the original name being confused in pronunciation with the Gaelic word "reithe" meaning a "ram". Speed's map of Ulster, dated 1610, and Johan Blaue's map of 1654, both mark the island as "Enis Garden" and show the symbol of a church tower. It is on record that the ruins of a church were still visible near the Round Tower in the middle of the eighteenth century.

Further proof of ecclesiastical occupation of the site came in the late eighteenth and early nineteenth centuries when human bones including several complete skeletons and remains of coffins were occasionally dug up in the vicinity of the Round Tower. A number of brass fastening pins, probably for monks' cloaks or shrouds, were found in conjunction with the burials, and amongst the coins discovered was one of
Edward I.  A properly conducted archaeological excavation covering a wide area around the Round Tower would undoubtedly produce very interesting and important results.
The most obvious monastic relic is the Round Tower which stands on top of a steep eminence near the east shore of the island. It is constructed from fairly small rounded stones which may well have come from the island's shores, and is forty three feet high, but was probably somewhat higher when it was originally built. Probably in the region of seventy feet high. The original doorway was about twelve feet above ground level on the south east side of the tower, a more recent one at ground level on the west side was built up in the late 1960s to give the tower extra strength and to hinder vandals. Two fairly small windows survive further up the tower. Archaeologists have dated the Tower to the ninth or tenth century.

During WW2 USAAF personnel from the American base at Langford Lodge and other American Bases around Lough Neagh took time off to relax on Rams Island. Made a change from working on Lightnings, Thunderbolts and Liberators etc. Some of the visitors carved their names and home states on the Beech trees. During WW2 a detachment of Belgian Troops were actually stationed on the Island. A television crew from 360 Productions filmed Dan Snow British Television presenter on Friday evening 5th August 2011 for a series of historical programmes on WW2 to be aired by the BBC. Surrounded by airfields and with the famous Sandy Bay Flying boat base Lough Neagh and Rams Island played a large background role in the war effort. This was mainly training, servicing, battle damage repairs and armament production.
for more wartime information see 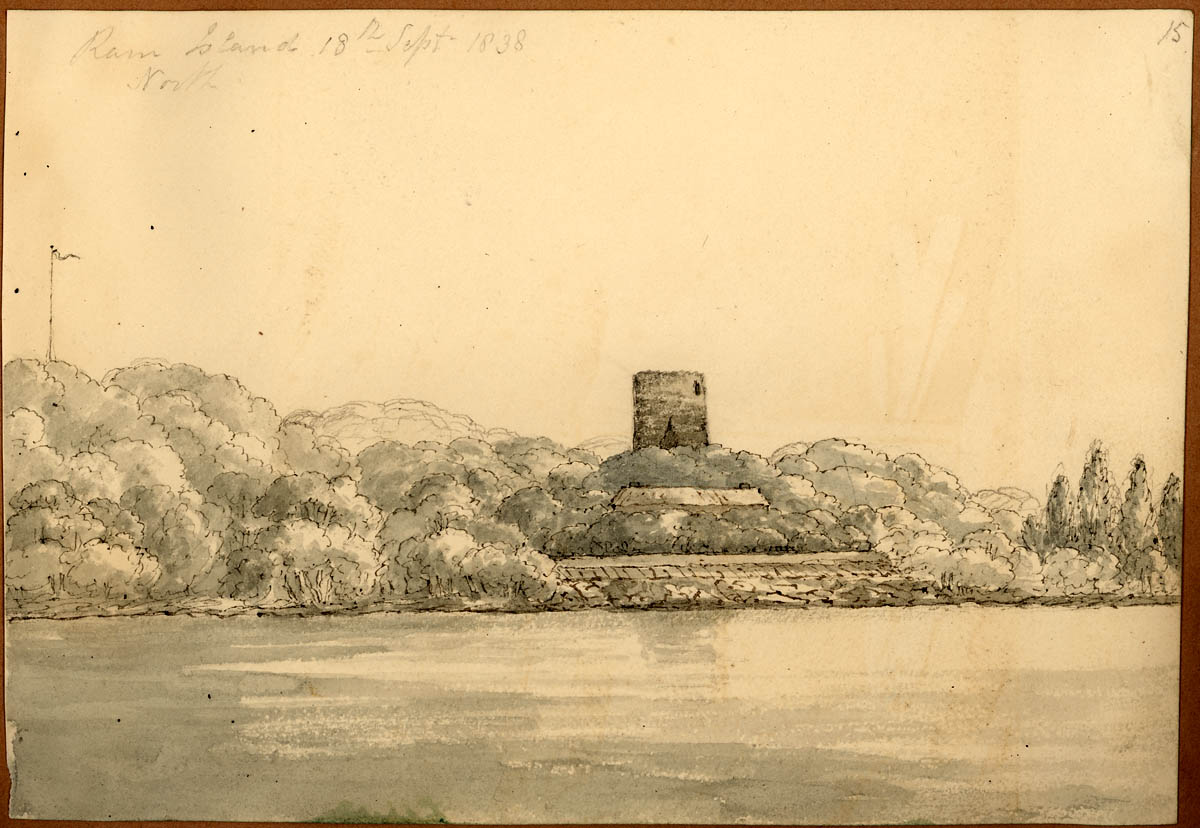 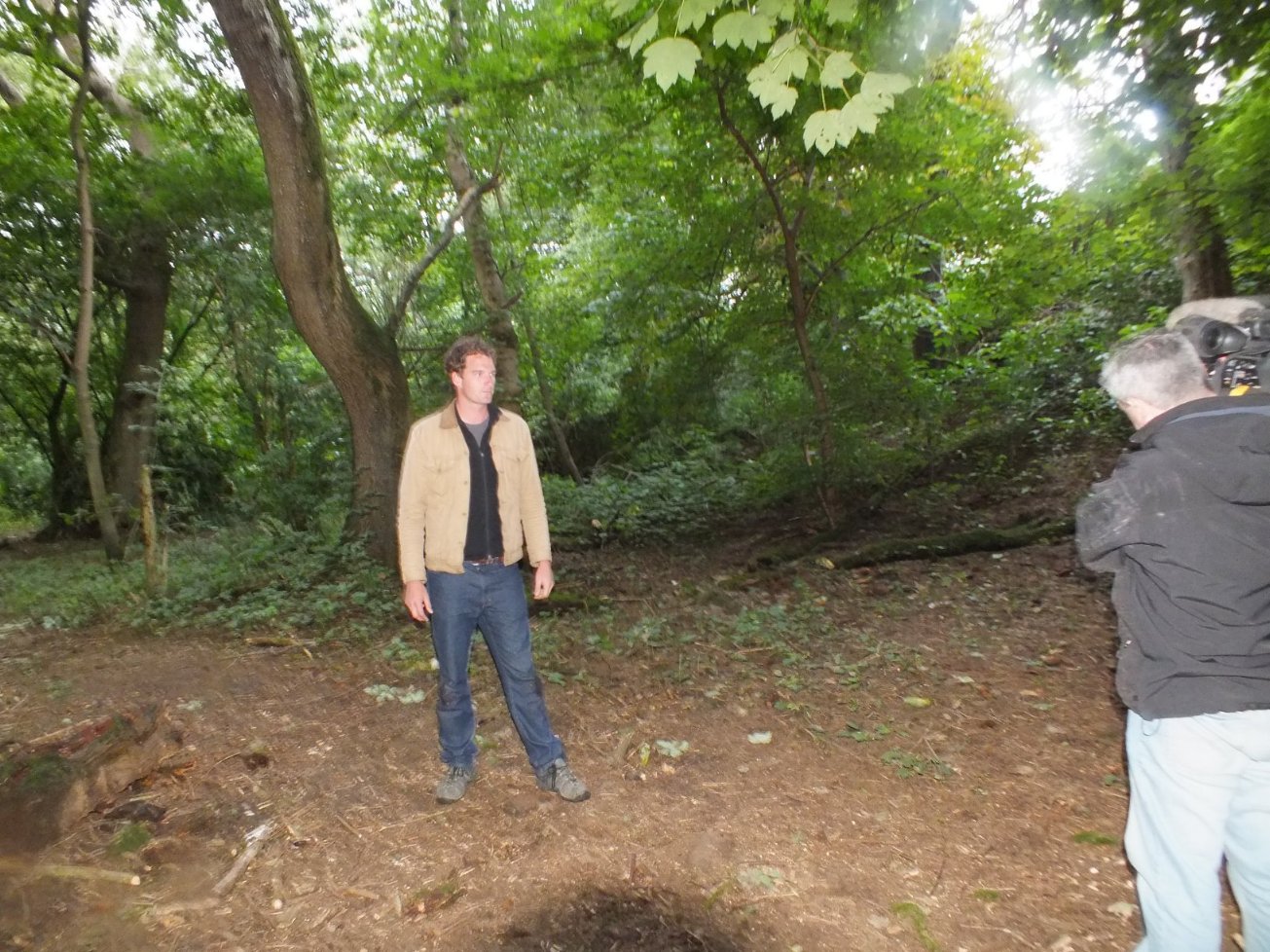 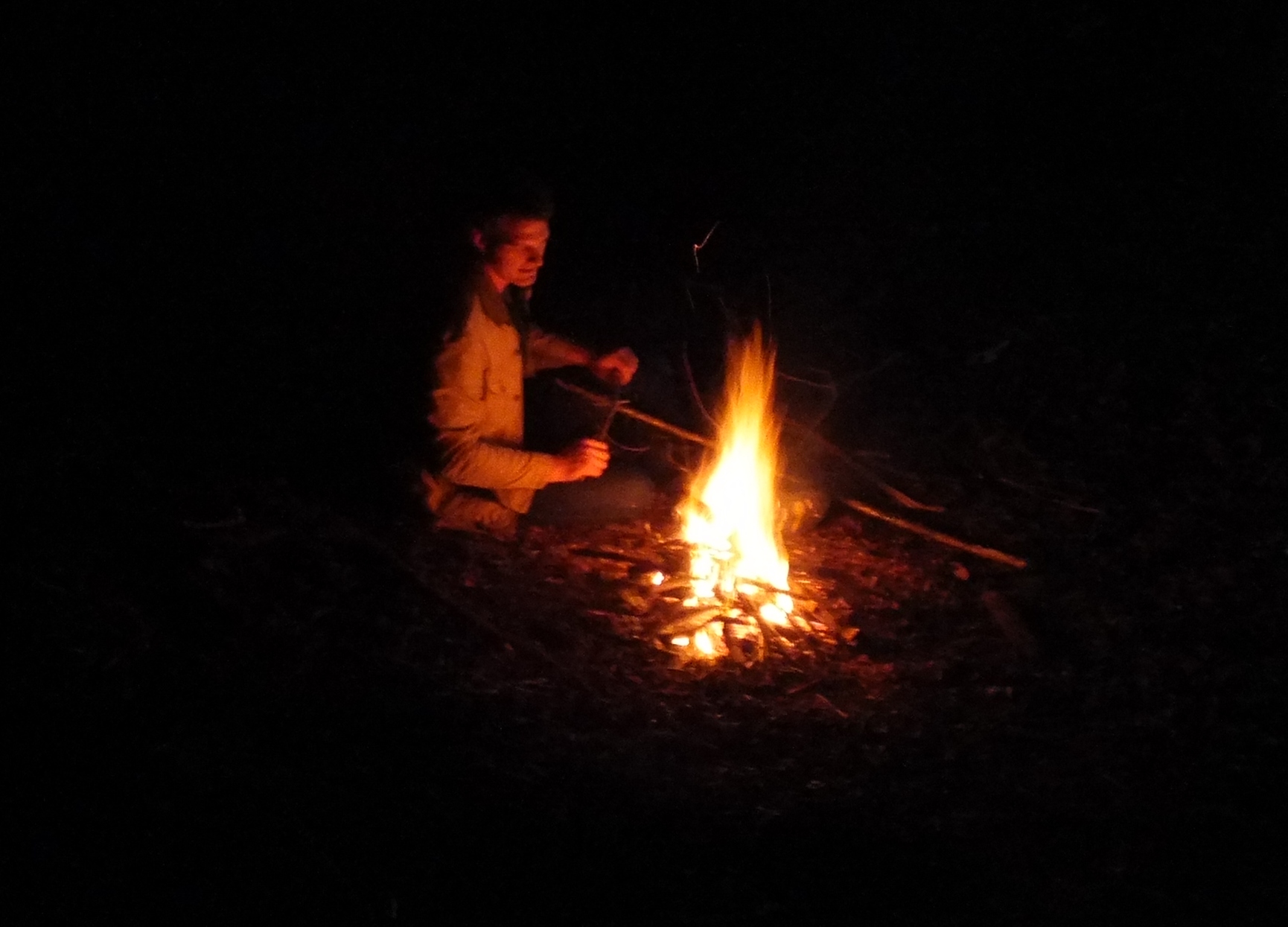 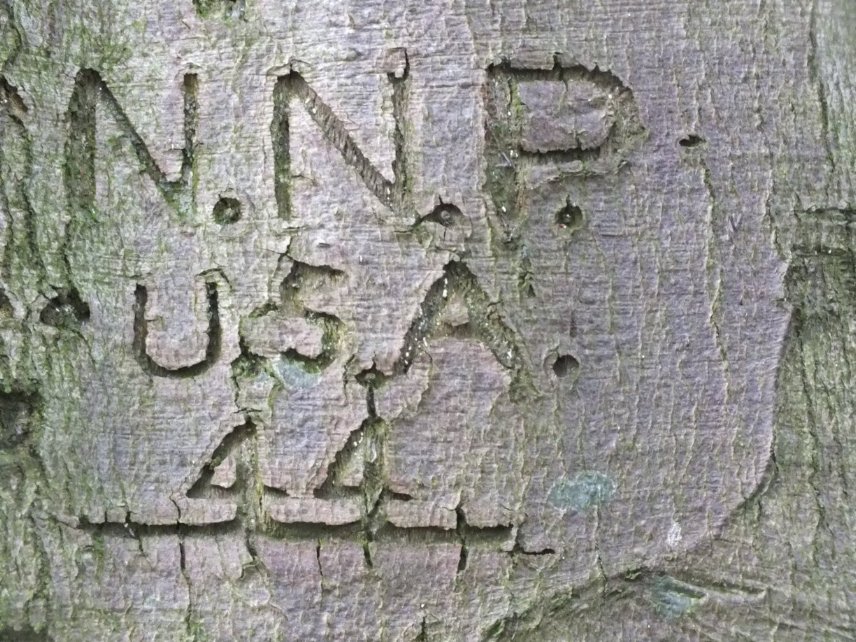 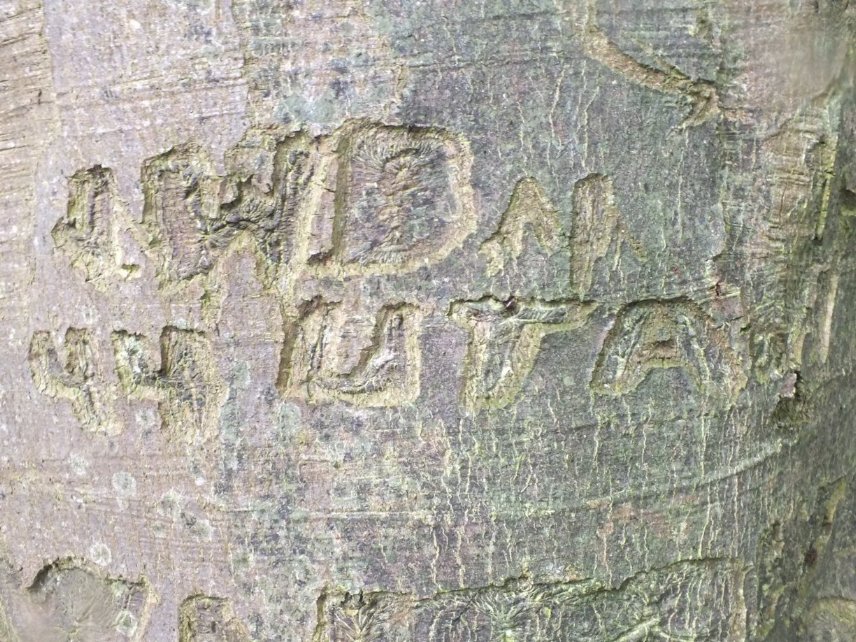 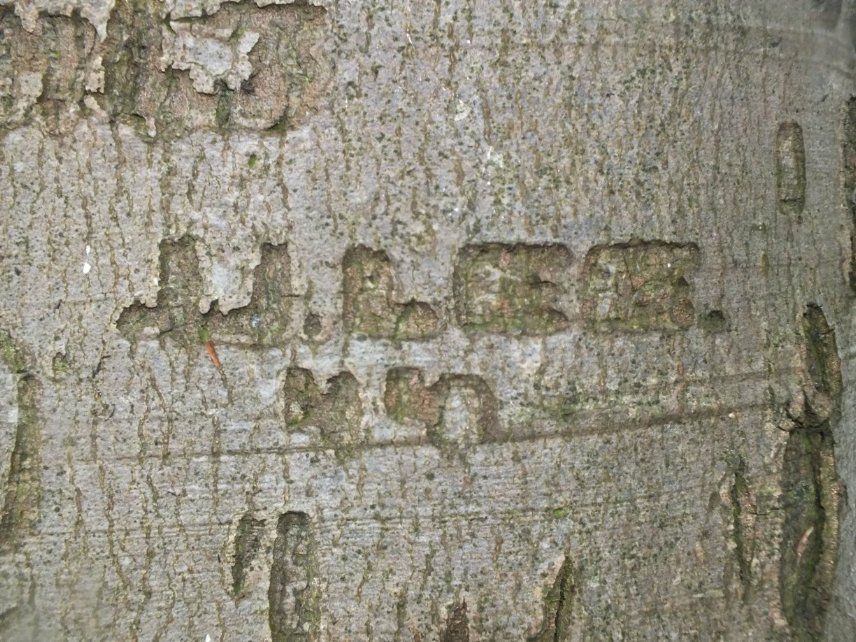 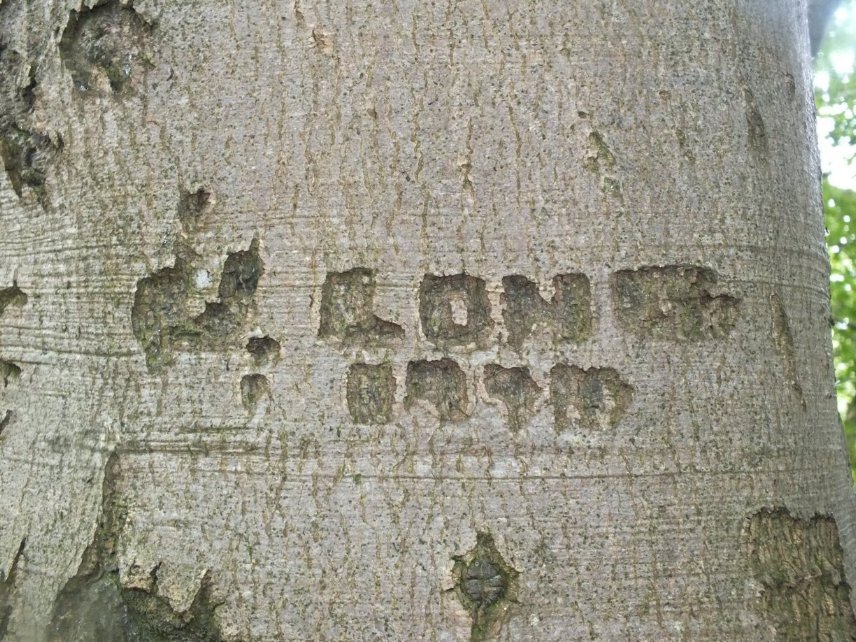 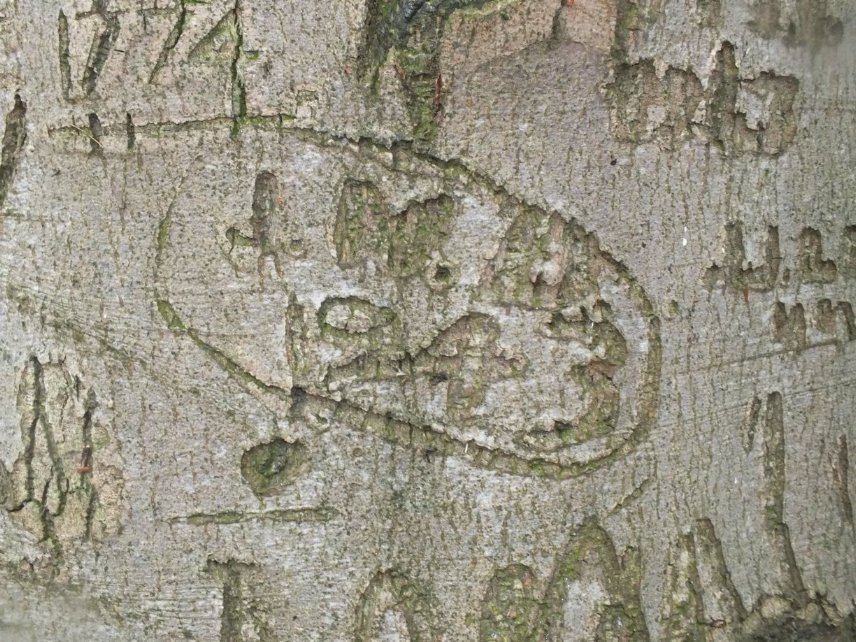 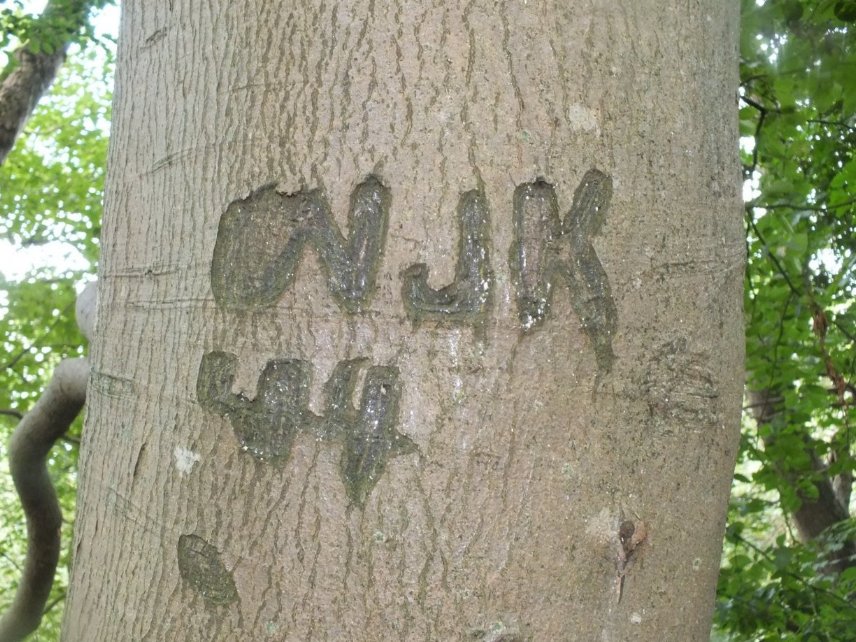 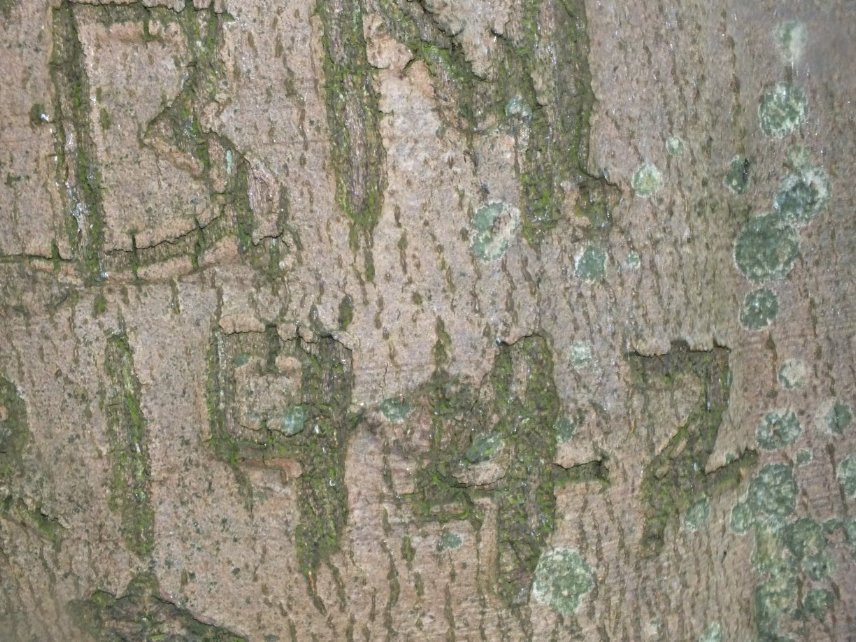 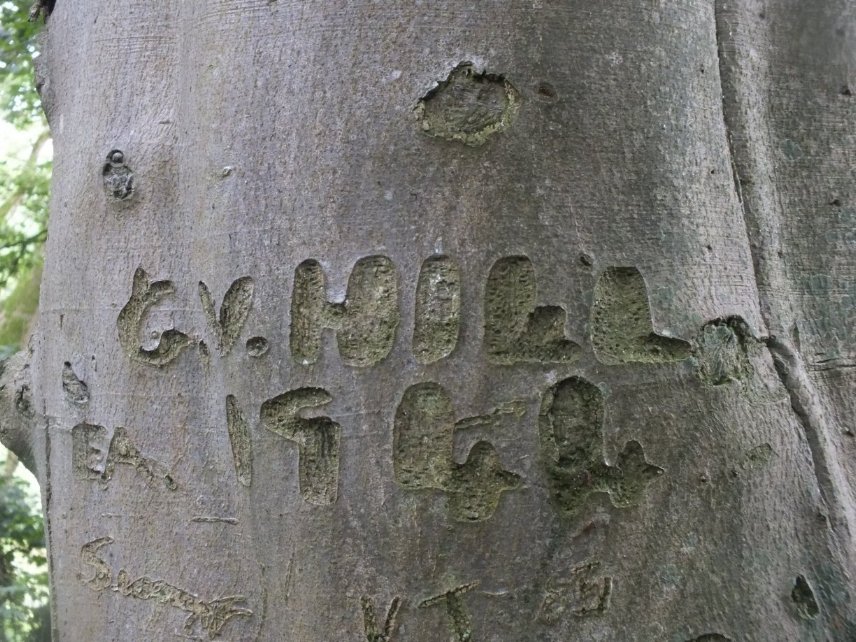 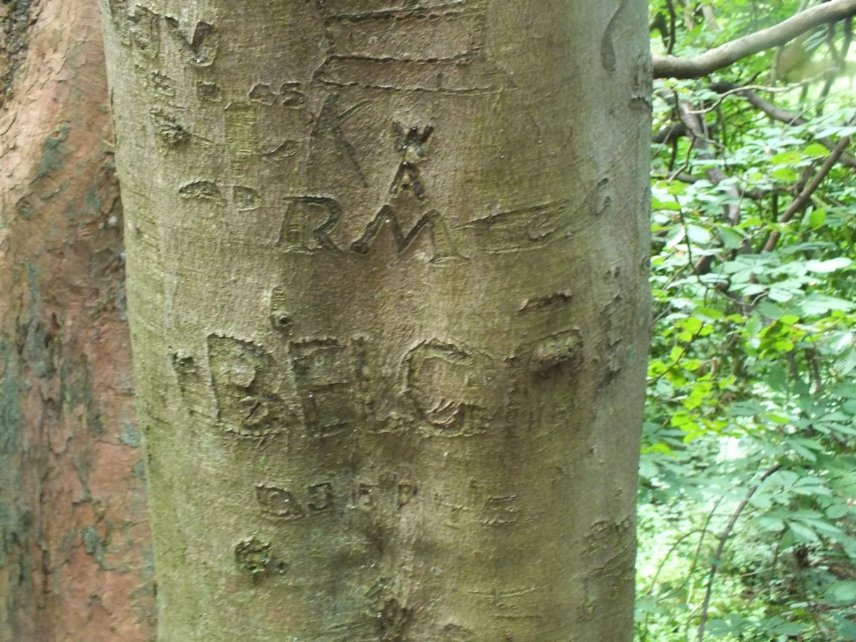 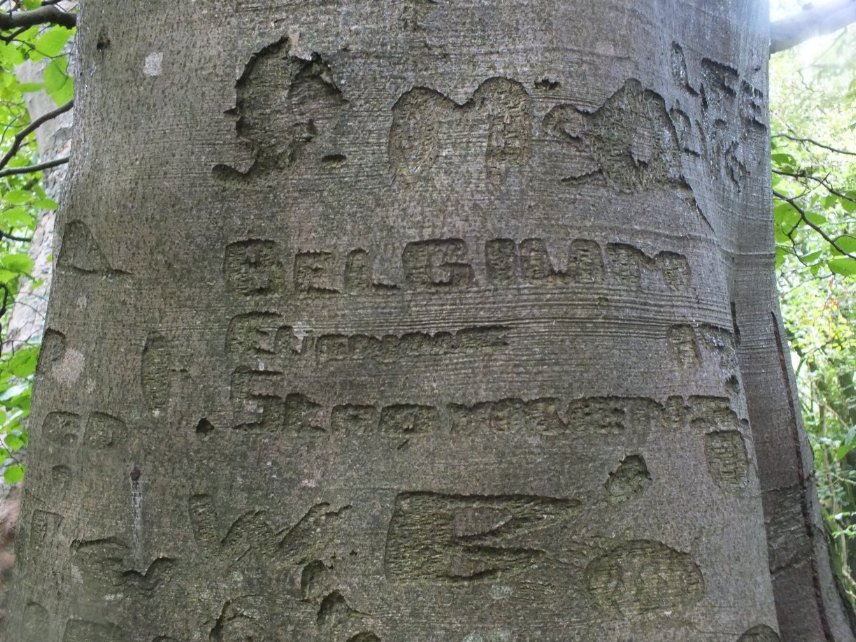 RAF Sandy Bay
Another exciting activity on Lough Neagh during world war two was the formation of a flying-boat base in Sandy Bay in the shelter of Rams Island. The entire bay was surveyed before laying down twelve flying-boat moorings with special rubber buoys and pick-up harness, also a number of marine craft moorings for attendant vessels and refuellers, plus four flying-boat moorings east of Rams Island (sheltered from westerlies). In order to guide the flying-boats and marine craft out into the open Lough, a number of navigation buoys (gas-lit, flashing) were laid out, tracking to the north of Rams Island and also to the south. Sunderland flying boats used these moorings and service facilities for the remainder of the war. 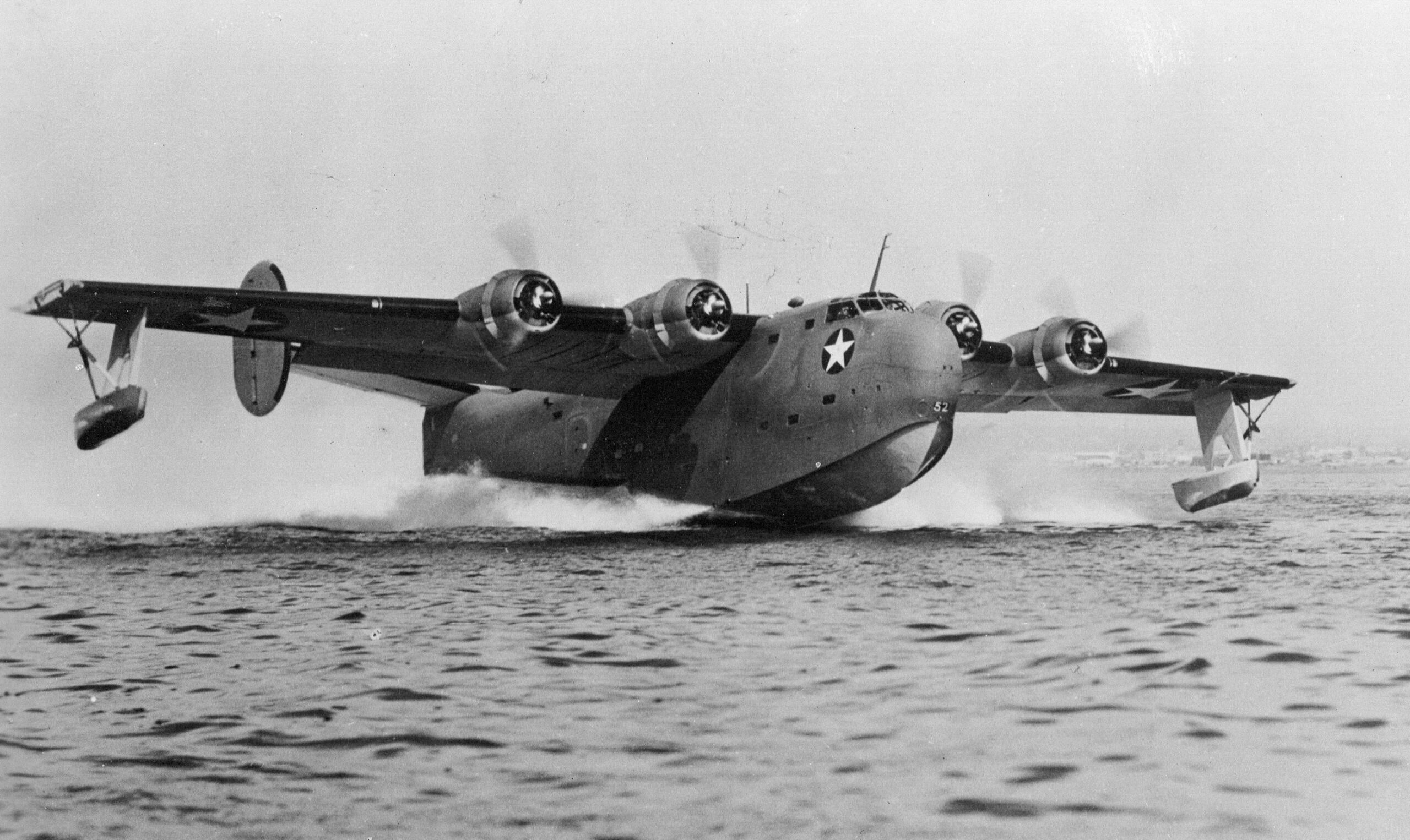 Lough Neagh, Rams Island and Sandy Bay played their part during the build up to the D day landings The first transatlantic service by PB2Y Coronado was operated by the U.S. Navy Naval Air Transport Service from New York to Sandy Bay, via the flying-boat base at Botwood in Newfoundland. Materials for the war effort were flown in daily to Sandy Bay. In one day in 1944 11 Coronados touched down at Sandy Bay a logistical nightmare just caring for the crews never mind unloading the giant aircraft and refuelling for the return flight across the Atlantic the next day.

From May 17/18, 1944, in the run-up to "D-Day" on June 6, a fleet of four-engined Consolidated PB2Y Coronado flying-boats added urgent passenger and cargo capacity across the North Atlantic to Britain. The U.S. Navy PB2Y-3R boats were flown by Pan American crews, American Overseas Airline crews and RAF crews from 231 Squadron.
It is recorded that 31 U.S. Navy PB2Y Coronados were contracted to the Atlantic Division of Pan American Airways and American Export. Engineers had to make 96 modifications to the fleet of flying boats for their new transport roles, including removing guns and bomb racks, faired-over turrets and passenger and cargo accommodation.
The first transatlantic service by PB2Y Coronado was operated by the U.S. Navy Naval Air Transport Service from New York to Sandy Bay, Lough Neagh, via the flying-boat base at Botwood Harbour in Newfoundland. Here, a meteorological officer, Hugh Lacey, kept a diary of many of the arrivals and departures through the base. His log reveals that at 1610 hours on May 17, 1944, a PB2Y Bu No. 7219, flown by Captain Durst, alighted from New York. It departed later that day for Sandy Bay. . . . .

From May 1944 Sandy Bay  also served as an airport for flights between the U.K. and the U.S.A.
The main users were the U.S. Naval Transport Service and RAF Transport Command, both operating PB2Y Coronados.
Sometimes the aircraft flew from Sandy Bay via Port Lyantey in North Africa and RAF Darrell's Island in Bermuda to the United States or Puerto Rico.
The service was well used with a recorded 280 passengers in June 1944 alone.
Still, the service ceased on 16 October 1944. 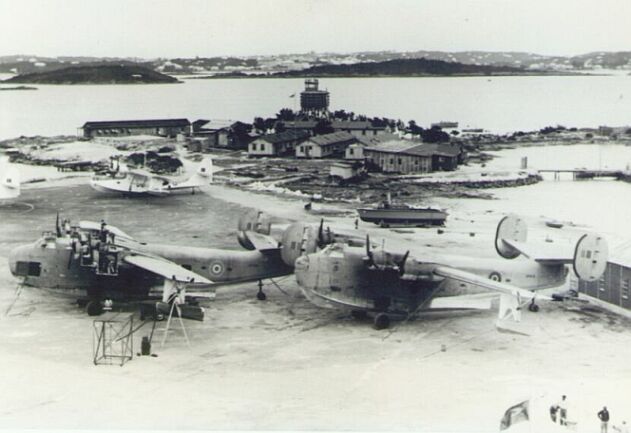 Acknowledgements  and thanks to the Late Jim McGarry and Wikipedia